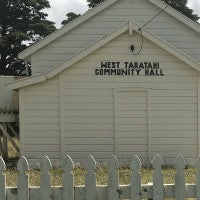 125 year reunion for past pupils and current neighbours

May 10th 2020 marks the 125th anniversary of the West Taratahi School.
The current committee is hosting a celebratory afternoon tea on Sunday 10th May 2020 from 2.00pm.
All Welcome
Please rsvp( for catering purposes)to: westtaratahihall@gmail.com
or P.M us from our facebook page

Happy New Year to all .
Hope you have all had a good break and read some great books.

The first book club for 2020 is this coming Monday 3rd February at 7.30pm at the West Taratahi Hall.

Supper, a Cuppa and some gossip and some laughs - All welcome - Gold coin donation for rental

See … View moreHappy New Year to all .
Hope you have all had a good break and read some great books.

The first book club for 2020 is this coming Monday 3rd February at 7.30pm at the West Taratahi Hall.

Supper, a Cuppa and some gossip and some laughs - All welcome - Gold coin donation for rental


It has been a while since the Open Day and some things have been happening around the Hall & House.


It has been a while since the Open Day and some things have been happening around the Hall & House.

• We have at least one hall booking for almost every week this year.

• Book Club meets on the first Monday of each month – next meeting April 9th 7.30pm

Everyone is welcome – supper provided. Lots of chat and laughter – gold coin koha.

• The house remains empty despite there being several interested applicants. We have discovered some wiring issues in the house and these need to be addressed before it can be rented out.

• The Hall is in need of a little TLC and in particular a small paint job on the south wall where some new weather boards have been fitted. If there is anyone who would be able to help with this it would be much appreciated. I believe we have some suitable paint available.

• The problem with the water to the toilets from the race has been addressed and it now working well – thanks to Art Eastham and Melvin Pike. Some further work and the insertion of a drum or barrel to gather water volume will make this a permanent fix. If anyone has a small digger to dig a hole for the barrel it would be appreciated – please contact Art Eastham on 027 419 8768

• The resident Rams have been causing a bit of a headache for some hall users as they attempt to make their escape at any opportunity. Their paddock fence is in need of repair and it has been decided that a back fence behind the toilet block from their paddock to the house fence would keep them out of the hall grounds. Peter Cox (fencing contractor)has offered his services for free if we can supply the materials. On that note we would love any donations of fencing materials: strainer posts, line posts, battens, wire(part rolls are fine) tensioners, staples etc and a couple of smaller size gates would be amazing. If you have anything around that you could donate it would be much appreciated. Items can be left in the shelter shed beside the hall or can be collected by a committee member. We would love to have this completed by the end of April so we can begin planning the garden area. Ph 027 2299196 Janet or 027 419 8760 Jill or 027 499 5333 Morris

• There are many ideas to upgrade the area around the hall to it and make it more user friendly. Ultimately the concrete pad beside the hall needs replacing for safety reasons.

• The addition of some suitable trees, shrubs and gardens would help to beautify It has been suggested that we hold a tree planting event around Arbor Day.The closest weekend is June 2/3rd A confirmed date and a list of recommended plants will be made available soon.

• Garden planter boxes are planned with the help of local support groups.

• Notice board, Picnic tables, memory garden, herb garden ,reinstatement of the tennis court, kids play area, upgrade of the flag pole are all on the agenda.

• The current committee meets monthly on the 4rd Thursday . If you wish to be more involved, we’d love to see you. Please contact Jill or Janet in the first instance.